Home » Blog » Why is the French Bulldog one of the most popular breeds? Why is the French Bulldog one of the most popular breeds?

The American Kennel Club (AKC) issues the ranking of dog breeds according to their popularity, and the French Bulldog is currently ranked 2nd. We have an unconcealed and eternal affection for Frenchies, but in this article, we try to be factual (as much as we can) and see what the reasons can be for such popularity.

The reasons French bulldogs are popular, rooted in history

According to historians French Bulldogs were first bred as a smaller version of the English Bulldog, in the 19th century, in English cities like Nottingham. Lacemakers kept them to chase the rats but due to the Industrial Revolution lacemaking was done machines and they lost their jobs. They moved to the south to France, where lacemaking was still done by hand and took the dogs with them.

The dogs soon got popular in the circle of French artists, actors, writers in Paris and the rich Americans visiting the city. They loved Frenchies so much that they took them to the US, where they were recognized by the AKC in 1898.

Why we love Frenchies today?

From the 76th place, Frenchies jumped to the amazing 2nd as announced by the AKC. What could be the reason for such an increase in their popularity? What is common in the 19th-century lacemakers, the Parisian artists and the thousands of people who own a Frenchie in the US today?

Lacemakers could easily work in the workshops while French Bulldogs were inside because Frenchies are very flexible and can adapt to various situations and families. They are not the kind of dogs who will destroy everything around themselves.

Families and couples who are proud of their tidy home love to have a French Bulldog who usually respects this. People who work at home can be sure that their pup will not disturb them during the working hours but will be there when there is a break.

Frenchies are adorable and social

Frenchies became popular with the Parisian bohemian people as they are absolutely adorable and social. Parents could easily take their puppy to the café or restaurant as French Bulldogs are not aggressive with new people. They are small, 11-12 inches tall, and usually don’t weigh more than 30 pounds, so it was easy to carry them anywhere. (Today’s celebrities also have a soft spot for Frenchies.)

It often happens that families where one or more members were hesitant to adopt a dog, finally fall in love with their Frenchie, they are impossible to resists. Couples or families having a big social life are also ideal parents as they don’t have to leave their puppy at home.

The downsides in the popularity of French bulldogs

Ranking so high has its downsides. There is an increasing demand for French Bulldogs part of which is simply fueled by the trend and not a genuine affection. A dog is not a toy and should never be adopted so that the owner can curate a nice Insta profile. On the other hand, scam breeders try to take this opportunity and satisfy the demand by offering unhealthy, unethically bred pups for cheaper prices.

The future of the French bulldog breed

It’s our responsibility, as breeders and Frenchie-lovers to stop scam breeders and help people choose the right breeder (see our earlier article about how to buy a French Bulldog online). We also have the mission to raise happy and healthy pups on our farm and find a forever loving family for them.

We are sure the popularity of these beauties will not decrease in the coming years and thanks to social media and the work of organizations like the AKC scams and unethical breeders will decrease.

The article is based on the expert knowledge of the TomKings Puppies team who have been breeding French Bulldogs for 10 years on their farm. All the pictures in the post belong to them and show a puppy from their breed. Check their available puppies here, or if you have any questions or comments let us know below the article. 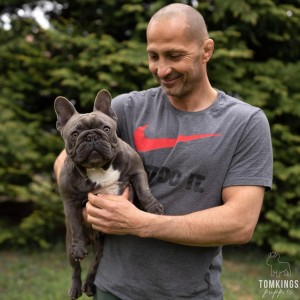 All Posts
PrevPreviousFrom a cute puppy to a smart grown-up frenchie – TomKings Puppies around the world
NextShould you let your puppy sleep in your bed?Next

2 thoughts on “Why is the French Bulldog one of the most popular breeds?”